Close your eyes. Take a deep breath and try and remember the last time you were in transit for over 24 hours, or pulled an all nighter, or came off night shift. Remember how tired you were? And how cloudy your brain felt? I do. It was yesterday.

Etihad were great. The seats were comfortable enough, the service was awesome, they had Pitch Perfect 1 & 2 on the entertainment system (What more could you want?!) and the onboard toilet had a tiled feature wall. Myself, Brad and the random guy on the window seat all slept about 10 hours out of the 14 hour flight, WOO! Thank goodness for compression tights and the occasional walk up and down the isles to keep the blood flowing.

We were feeling pretty fresh when we arrived in Abu Dhabi and then once we boarded the flight from Abu Dhabi to Berlin it was all down hill. The plane wasn’t as comfortable, we had to wait on the tarmac for a good 40 minutes and then when we finally arrived in Berlin, the luggage conveyor belt stopped working and we waiting another half hour for my backpack to make its way to me. There certainly are worse things happening in the world but it set the wheels in motion for the afternoon…

We chose to take a taxi to where we were picking our Motorhome up from. According to Google maps it was 35 minutes away by car, or 56 minutes by train. We decided to treat ourselves and get a taxi. BIG MISTAKE. There were a couple of accidents so at 3pm in the afternoon traffic was at a stand still and it took us over an hour to get to the rentals place, where the whole process then took a further 90 minutes as the guy running the show was having some heated exchanges with another German man. While I don’t speak a word of German, the tone and the word ‘shizer’ was being thrown around I thought it was best to stand back and wait.

I thought we were getting a red motorhome so I had already named her Scarlett. Unfortunately the red one was gone, and I just couldn’t bare to change her name, so everyone, meet Scarlett! She is a 2014 Fiat Dethleffs T4 Globebus. She’s takes Diesel, is manual and left hand drive. YAY CHALLENGES! 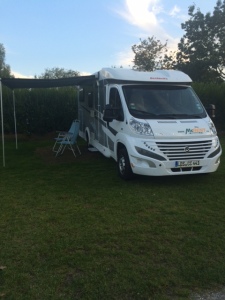 Brad drove Scarlett of the rentals place after a not so subtle hint from my Mum that it would be good if he drove first (thanks Mum, I was far too tired to be bothered will all of that!).

We were on our way to IKEA to pick up some supplies. Only a few minutes in to the journey we figured we had done something illegal. Whether it was merge incorrectly or run a red light, we aren’t quite sure, but became rather panicked when we noticed the policeman behind us who was turning left, until he saw what we did and followed us instead. As he pulled up beside us, I flashed my best smile and waived. He laughed, shook his head….and waived back. THANK YOU NICE GERMAN POLICEMAN!

We parked at IKEA (the RV takes up about 2.5 standard spaces) and headed in side. I hate IKEA. I always have. The whole one way in and one way out things really annoys me. We wasted a lot of time trying to find suitable and cheap bedding on the middle floor. I feel really bad just expecting locals to be able to speak back to me in English, but we’ve been so lucky that most people are bi or multilingual and after we say hello and how are you in German they are more than happy to help us out. We found out the area we were in was all display and we should head downstairs for what we need. But we needed food first. It was about 6pm and everyone knows the best thing about IKEA is the cheap food! Of course the meal we chose had about a 5 minutes wait. We then went to pay and they only accept IKEA credit cards. Thank you Aunty K and Lozi for the Euro’s, they came in very handy!

We got all of our bedding and things for the motorhome and scanned it at self service downstairs, went to pay, sure enough it was the same, only IKEA credit cards or Euros accepted. We had to void the sale, run to an ATM, go to an actual cashier and pay in Euros. We then went outside and couldn’t find the RV. HAD WE BEEN TOWED? Nope, we just went to the wrong carpark. Phew.

It was now time to find our campsite. We have no working phone at the moment so we downloaded the map that would work offline, as well as Google maps it on Wi-Fi as a back up. We left IKEA at 7:50pm and things were going well, Google maps, with voice navigation was working!! Unfortunately about 10 minutes in to the 30-minute drive to the camping ground, we missed a turn and Google couldn’t re route. We had the other offline map so followed that instead. Things were taking a bit longer than expected and we knew check in had to be by 9pm at the place we were staying.

I was navigating and as we turned down this road there was a small sign on a stand, in German of course, that looked like the lane we wanted to drive in was blocked. Desperate to shower and get to sleep I said to Brad ‘hmm I feel like if this was a road block, the would have tried harder.’ So we drove down the most creepy, dark, forest road I have ever been on for about 6 kilometers. IT was all going well until we saw a more convincing road block. Yep, we couldn’t get through and now had turn the RV around. No easy feat on a narrow, two lane forest road with guardrails in Scarlett who is 6.7m long by 2.8 high.

I jumped out of the car and started guiding Brad, when the cars in the other direction started arriving. Here I was at 8:30pm at night, in bright travel pants and a black top, asking them to please wait while Brad did a 30 point turn because we are silly Australian millennials in an RV who don’t abide road signs.We got out of there, found a different route and were on our way to the campsite. We arrived at 9:02pm and there was not a soul in sight to allow us to check in. I also rang the doorbell. No luck. I then asked a person staying there what the go was and he said ‘oh they are usually open until 11pm on Friday, not sure while they closed early tonight.” Fabulous. Squatting on our first night didn’t feel right so we went two minutes up the road to find wifi at the McDonalds to find another campsite that might be open. No luck.

Remember how I asked you to remember how you felt after at least 24 hours awake or a night shift? Well it’s now 7.5 hours later then when we first felt like that, we hadn’t showered, or slept. That’s it. It was hotel time. We drove another minute down the road and checked in to an Ibis Hotel for the night that included buffet breakfast. Here’s Scarlett enjoying a night off…

We finally got to sleep around 10:30pm which was 6am Brisbane time. OMG.

Today the breakfast was delicious; we checked out and headed for ALDI to pick up some groceries. We got there at 10:30am and guess what, it was closed. It was only later in the day after our third attempt to find a grocery store that we found out it was German Unity Day. Arguably the most important public holiday, celebrating when the wall came down in 1990. More than happy to eat out this weekend to account for that.

We’re now cruising along the autobahn to Lubeck.

Scarlett comfortable hits 140km per hour while the Porsches, Lexus, Mercedes and BMW’s scream past us.

I had my turn at driving the RV today without incident, and even reversed her in to the campsite, as Brad was hit with the late afternoon jetlag and struggled to string a sentence together haha.

Am I cursed or have you had some travel disasters?

6 thoughts on “The joys of travel…”