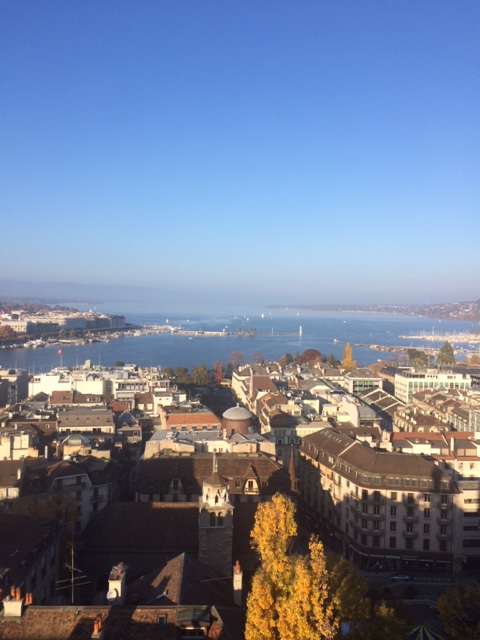 Brad and I had breakfast early on Friday morning before he set off for the airport, and the long journey back to Brisbane. As I waived him off, it dawned on me. I was going to have to carry my luggage, ALL BY MYSELF. How the mighty have fallen.

I strapped on my 17kg backpack, awkwardly wheeled by 9kg carry on bag and thought to myself “shit Britt, you really suck at this backpacking thing” but I made the one kilometre walk to the bus station determined that I would start to downsize. My weight, as well as the luggage I hope!

I wasn’t looking forward to the 4 hour bus ride from Munich to Zurich, and then the 3 hour train from Zurich to Geneva but given flights were $500 one way, I didn’t have a choice. In hindsight I was incredibly lucky to get my ticket for $70 when I only booked a week in advance. The bus trip started with two men being escorted off by police, and then we were on our way.

Unfortunately I literally had no room to carry snacks but was confident we would be having a morning tea break. How wrong I was. This bus ride was 4 hours STRAIGHT, no stop. Boy the Germans don’t muck around. I spent the last hour just trying to hold myself together and not eat my own arm and was very relieved when I got to the train station and ate my $12 tomato and mozzarella sandwich. $12 and no meat to be seen? What a travesty. All complaining aside, the train trip was the most scenic one I had ever taken. As soon as you enter Switzerland you can see the snow capped Alps which are complemented by rolling green valleys and farms. Certainly a step up from the Bogan Express trip from Brisbane to Maryborough West (also known as the Tilt Train) I was forced to take a few times. Okay, maybe three times tops.

I arrived in Geneva where I stayed with some friends and set about exploring the city. I’ve heard from people that they think Geneva is boring and not really a place to visit, but I loved it. It’s a rather small city considering it has such a big name. The population is about 500 000 and I found it to be a very walkable place and easy to get around on the trams and buses. It’s also a very EXPENSIVE city with the demand on rentals far outweighing the supply. You would be looking at about 800 AUD per week for an average 2-bedroom apartment. The landlords are happy campers in Geneva, and don’t do a lot to maintain their investments. I found it to be on par with the cost of Norway.

I ended up spending 5 nights in Geneva and visited Saint-Pierre’s Court in Geneva’s Old City. It is home to the International Museum of the Reformation, an archaeological site, the Saint-Pierre Cathedral and its towers and the Old Town, all on Sunday! The museum is housed in the Maison Mallet, a historic swelling that was built during the 18th century on the former site of the cathedral cloisters where the Reformation was voted in 1536. I found the archaeological site and the views from the top of the cathedral tower very interesting and worth while, however the museum was incredibly focused on religion and the wealth of information could have been presented in a more compelling way.

One touristy thing I did do that I absolutely loved and is an absolute must do if you visit Geneva is the United Nations Headquarters guided tour. Almost 10 000 UN staff work in Geneva, beating the US HQ by 200 people, a fact they are very proud of! My guide was very well spoken, passionate and efficient. As usual, there was one person in the group who tried to show her up on numerous occasions and thought he knew everything. Why does there always have to be at least one of these people wherever you go?!

I got in to a routine of doing a run by the lake each morning, and then walking the city during the day. As I’ve mentioned before, Geneva is crazily expensive which is a good insensitive to walk everywhere! While I was there, I met a lovely Australian Expat, we got chatting and had a lot in common, so we ended up going out for a delicious French dinner and then cocktails at a well known hotel, called the Leopard Bar. Julie has worked in Geneva for the past four years and had some great tips about the city.

Being in the one city for 6 days was a nice change.  It was great to slow down a bit and catch up on some life admin, as well as get outdoors. Geneva was a few degrees warmer each day compared to the Scandinavian countries. It was strange to not have to wear a scarf and gloves everywhere!

My top six facts on Geneva (Because 5 is too common)

One thought on “Switzerland, a worthy opponent to the $25 pie!”