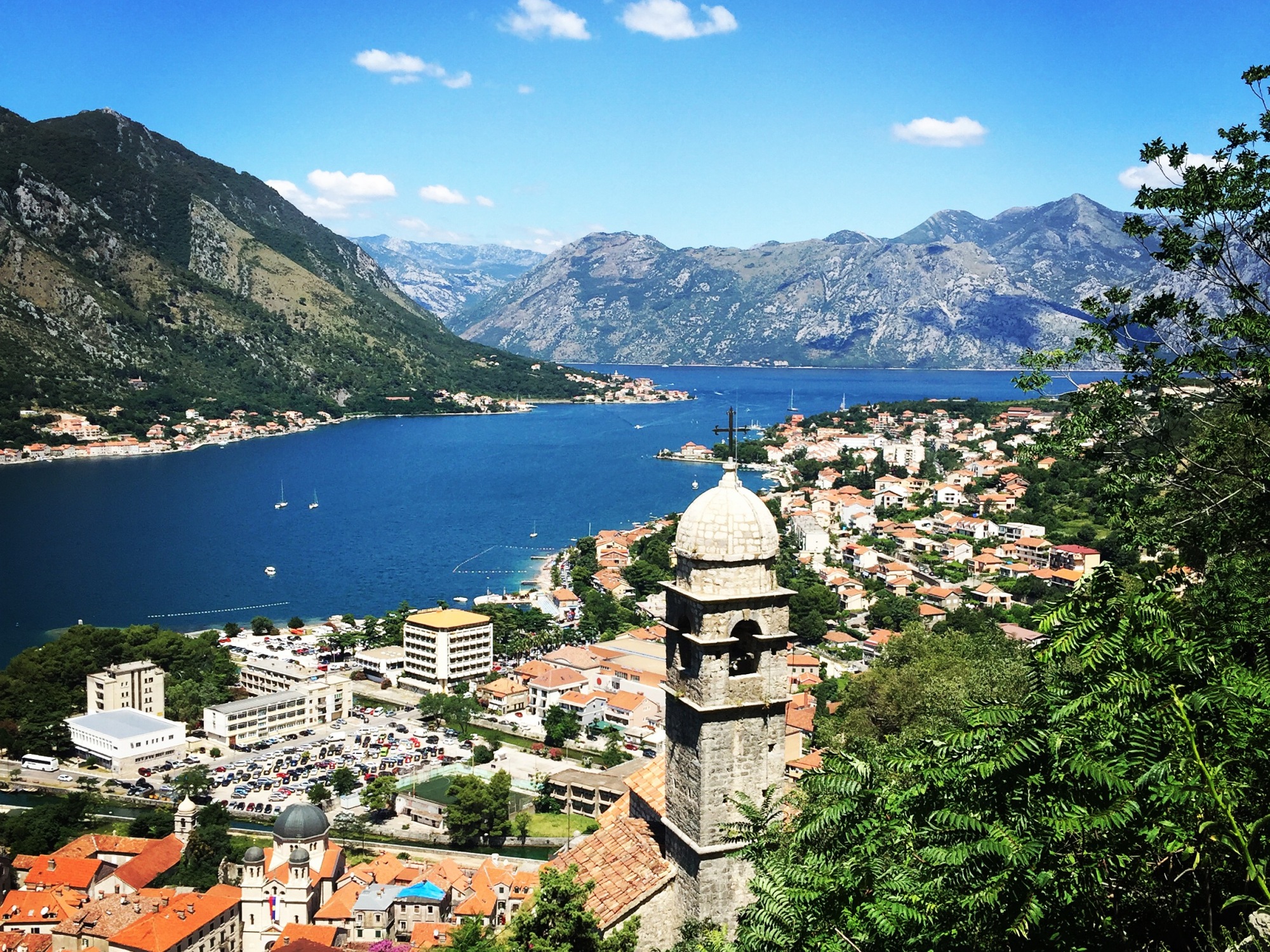 What a combination. My requirements for this 10 day summer vacation were simple- sun and a beach please! Croatia, Montenegro and Malta did not disappoint.

It has been almost 3 months since I first stepped foot in Dubrovnik and I am still in awe of the place. I arrived very late on a Wednesday night which means I couldn’t see much, but as we drove around the bend from the airport in to the Old Town, the city was lit up and burgeoning out of the cliff face, and you could see that there appeared to be endless ocean. It looked magical and Dubrovnik was radiating nothing but good vibes, even at 1am on a Thursday morning!

I made my way to the hostel I was staying at, located in the Old Town walls. They gave me very specific directions about how to get there and how to avoid the route with many stairs. I mean, how many stairs could actually be in this place? As I soon found out… a metric shit tonne! Yes, that is a unit of measurement in the Australian-English dictionary ;).

I stayed at Hostel Villa Angelina Old Town and Marta and Daro stayed open just to check me in and show me to my room, and carried my bag down all of the stairs. I’ve stayed in a lot of hostels over the past 12 months and this one by far had the best staff!

On my first full day in Dubrovnik I explored the old town, wandering through all of the streets to see what I would stumble across. This proved to be a great way to do things. I followed a crowd and walked down some steps to find a cafe built in to the rock face, an incredible view of the Adriatic sea and some people cliff jumping.

After walking around for awhile, I realised how hot and humid it was and knew that with pale and fussy skin like mine, a giant hat & 50+ sunscreen had to be acquired, STAT. After those items were acquired , I had some seafood for lunch, and then went to explore the Old Town walls. They are just incredible! They are almost 2 kilometres long, with enviable views of the ocean and many places to stop and get beautiful photographs and soak up the city’s history. You can spend hours just wandering around. Below is a quick tour of the best spots.

After exploring, I went back to the hostel (After getting majorly lost; all the streets look the same!) to get changed for the sunset sea kayaking tour. Here I met one of my new dorm mates, Steph, an American living in Italy and insisted she came with me. While the skies were blue and the weather was warm, the wind had really picked up. The tour people asked a few times if any of us had sea sickness, which I get quite badly but was determined to do this activity, so I kept quiet. We set off and soon enough realised how difficult the wind actually made it! It felt a bit like a 3 hour survival of the fittest test. We arrived at our fist stop, went snorkelling, inhaled a sandwich and all discussed how much our arms hurt! It was an amazing way to spend an evening though and gave you a different view point of Dubrovnik. Steph and I were relieved to make it back to dry land with our stomach contents in tact (no small feat considering around 6 people along the way were vomitting and had to be rescued) after kayaking 6kms. We relaxed by the water with some free wine, new friends and then ate our body weight in lacklustre Italian food.

Friday I was booked in for a 3 day Island hopping tour and the weather had turned. I got on to this rickety boat and felt pretty green for the 90 minute journey to the first Island. Thankfully two guys on the trip were keeping and eye on me and we became friends. In between the big summer storms, we ate fresh fish and salad, and I spent some time with some other Australians who were touring around. By the time I got back to Dubrovnik, the Old Town had been saturated from the showers and turned in to a total death trap, and the temperature had dropped by about 10 degrees. Here Steph and I met two American girls, we all went out for some delicious food at Lady Pi Pi– a must visit in Dubrovnik, then stumbled across a Irish pub, met some more people, ended up clubbing in an old fortress and then walking home in a storm. What an experience! The next day and a half were spent by the beach with new friends, soaking up the sun and relaxing. I got quite used to the food and drink service while laying on a sunbed!

I would highly recommend Dubrovnik to everyone looking for a safe, fun and interesting place to visit.

The next adventure was a 3 hour bus ride on an over sold bus with broken air conditioning to Kotor in Montenegro. We had a border crossing, passports were stamped and the bus then went on a ferry to get us a cross to Kotor. Quite an interesting experience. The first thing I noticed about Kotor is how untouched by tourism it is. Yes there are some tourists there and cruise ships pull in for pit stops, but it also is very undeveloped and has an authentic feel about it. I stayed at Hostel Kotor in the Old Town and was a pretty cool place, along with decent air conditioning so I really couldn’t ask for more! I had dinner nearby, it was average and an early night after partying a little too hard in Dubrovnik. The next day I walked up to Kotor’s Castle Of San Giovanni , it was hard work, but absolutely worth the breathtaking views. I was also made to feel at home on my way down when a snake slithered across my path. I managed to keep my cool but did descend rather quickly.

Here are some of the views across the bay…

It was so bloody hot after the hike I headed to the nearest beach and spent the afternoon alternating between the sunbed on the pebbles and the warm Adriatic sea. On the way back, I stopped in at a sandwich shop, had a huge burger for 3 euros and made friends with a little Russian boy who decided he wanted to eat dinner with me. He couldn’t speak a word of English, and obviously I do not speak Russian so we just smiled and laughed at each other until his Mum came to translate. He was quite the ladies man at the ripe old age of 4.

On the way back to the Hostel, the sun was setting over the Bay and I was feeling pretty grateful to be experiencing such a wonderful summer holiday.

The next stop was Malta where I was meeting up with on of my fav travel friends, Emily. We were booked in to a hostel that didn’t have any a/c and you couldn’t drink the tap water so me being a princess lasted one night before going to a hotel. It was great to catch up over a waterfront dinner and then spend the next day at the beach. I don’t think I’ve spent this time in the sun well, EVER! The spot, aptly named Golden Bay was a superb way to spend a day. 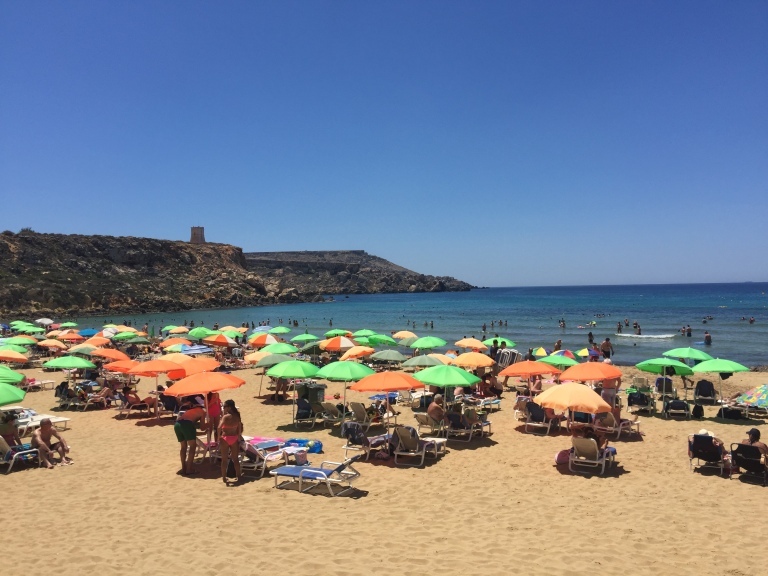 Unfortunately that’s where my love of Malta stopped. I otherwise found it to be a trashier version of the UK without much to offer. I can’t say I gave it the chance It deserved though so I’ll remember it for the couple of enjoyable days I did have there, and of course, catching up with friends.

Now summer is over, the temperatures are dropping, the heating has been turned on in some parts, and I’m thinking my next trip will have to involved snow and/or the possibility of seeing the Northern Lights again. Any guesses of where I am thinking of heading off to next?

Until next time, B xo